One hundred years ago, on April 2, 1918, Delia A. Phillips made news by voting in what was, it would seem, a ho-hum election in Le Roy, Genesee County.

Phillips was the first in line that day as she seized the opportunity to cast her ballot for the Republican candidates, all of whom ran unopposed. In doing so, she was the first woman ever to vote in Le Roy.

Her pioneering act of citizenship was commemorated Monday with a celebration and the dedication of a historical marker in front of the Municipal Building that notes the place where she voted.

An aerial view of Le Roy taken in 1972 shows some of the town's landmarks. At the intersection of Route 5 and 19, is the First Presbyterian Church. The Municipal Building where Delia Phillips was the first woman to vote is across the street to the left of the church. At top right is St. Peter's Catholic Church (Photo: Staff file photo)

Lt. Gov. Kathy Hochul also spoke, looking back to the 1848 Women’s Rights Convention in Seneca Falls and then moving forward, stressing that the fight for women’s equality continues.

Lt. Gov. Kathy Hochul speaks at a dedication of a marker in honor of Delia Phillips who became the first woman in Le Roy to vote, 100 years ago on April 2, 1918. The marker was placed at the Le Roy Municipal Building. (Photo: JAMIE GERMANO, Staff Photographer)

“It’s important to tell the stories of the struggles,” said Hochul, who is chair of the state’s Women’s Suffrage 100th Anniversary Commission.

Hochul also called for a change in New York state law to allow early voting as a way of increasing turnout. “What is so magical about one Tuesday in November?” Hochul asked.

Delia Phillip’s story was first told on April 3, 1918, by The Daily News of Batavia. The headline simply said, “Woman Aged 91 Voted in LeRoy.”

Of course, it wasn’t so much that Phillips was 91, it was that she voted at all.

New York state had given women the right to vote the year before, three years ahead of the ratification of the 19th Amendment, which extended the vote to women throughout the United States. 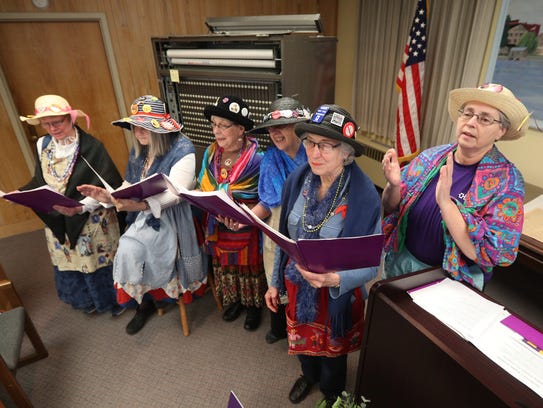 The Rochester Raging Grannies perform during a dedication of a marker in honor of Delia Phillips who became the first woman in Le Roy to vote, 100 years ago. The marker was placed at the Le Roy Municipal Building during an April 2, 2018 ceremony. (Photo: JAMIE GERMANO, Staff Photographer)

Fifty-seven other women joined Phillips to vote in Le Roy at the Municipal Building. Some of them wore their Red Cross uniforms, as they were helping out with war-related efforts in another part of the building.

The women voted on machines — they had earlier been given instructions on the procedure — and had no trouble with the process.

Two mechanical voting machines of the kind no longer used in the state were on display at the anniversary ceremony. In keeping with Le Roy’s distinction as the home of Jell-O, people could step into one of the voting booths and cast a ballot for their favorite flavor of the dessert. (Hochul backed strawberry.)

The women of Le Roy were not the first to vote in New York state. That honor went to women in Lisle, Broome County, who took to the polls on Jan. 5, 1918, led by Florence B. Chauncey.

In March 1918, town elections throughout Orleans County were held, marking the first large-scale turnout of women voters in the state. The Democrat and Chronicle reported that women and men voted in about the same numbers, many women drawn to vote in favor of anti-alcohol initiatives. At least two women were also elected to local offices.

“The result(s) indicate that the addition of two million women to the electorate of the state is a matter that must be reckoned with (by) our politicians,” the Democrat and Chronicle concluded. 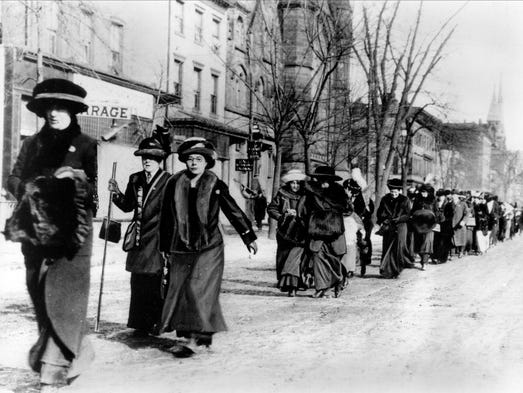 Suffragists led by "General" Rosalie Jones march from New York on their way to the Woman Suffrage Procession in Washington D.C., on the eve of Woodrow Wilson's inaugural in March 1913.

In Monroe County, many women first voted in the September 1918 primaries. Their votes made news, but the war in Europe was raging, and it dominated the headlines.

The Batavia newspaper account of the April 1918 village election in Le Roy doesn’t say why Phillips received the honor of voting first. Perhaps it was her age; perhaps it was her standing in the community.

Born in Lima, Livingston County, in 1828, Phillips had been a Sunday school teacher there. According to Belluscio, she moved to Le Roy when she was 61.

She joined the Presbyterian Church in Le Roy, teaching Sunday school there, as in Lima. Her class threw her an 80th birthday party in 1908. To note the occasion, Phillips contributed 80 pennies to the school’s Sunday collection.

Other newspaper accounts indicate that Phillips was also active in the Le Roy branch of the Women’s Christian Temperance Union, leading, along with Mrs. J.W. Struble, the evangelistic and Sabbath observances.

Phillips died in 1920 and is buried in the Old Baptist Cemetery in Lima. At the end of the anniversary ceremony, Lima historian Joyce Rapp was presented with a wreath of yellow roses to put on Phillips’ grave.

The gravestone lists her name and years of birth and death. It doesn’t indicate her place in Le Roy history. The historical marker in Le Roy now fills in that gap.

Jim Memmott is a retired senior editor for the Democrat and Chronicle.