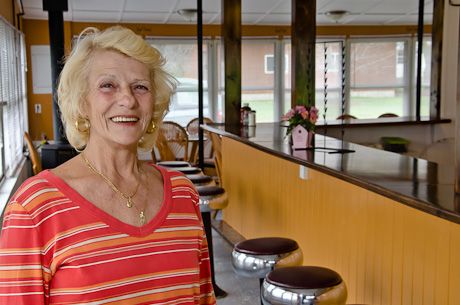 Rose Mary Christian thought she would be retired these days, but she can't quite get away from the restaurant business.

She admits, she loves it.

In 1956, her father -- with the help of Carl Dilcher and George Jacobs -- built a diner on Ellicott Street Road near Shepard and Christian, along with her eight brothers and sisters, worked there for much of her young life.

"We used to have good times and you hear people reminiscence about the old days," Christian said. "Hot dogs were 25 cents when my dad started and milk shakes were 50 cents. Now what’s a hot dog and what’s a milk shake? There’s a big difference."

Christian closed the diner in 2003, and then new owners took it over for a time more than a year ago, but eight months ago, that diner closed.

On Monday, the diner opens again as "Rosie's."

"I hope people drive out and see the restaurant and taste what we have to offer," Christian said. "I hope they just have a good day and a good experience coming here. Like I said, this is where good people meet."

The diner's menu, among regular diner fare, will include Italian and Polish dishes and homemade soup.

“We’re going to have a quarter pound hot dog, like they have in New York City, that I love," Christian said. "It’s going to have mustard and sauerkraut on it. It’s delicious. You’ll have to try it."

Christian noted there aren't many dining establishments on the southeast side of town, plus there will likely be a road connecting the new ag park to Cedar Street, making it easier for workers there to get onto Ellicott Street. That could be the opening in the market she needs to be successful.

Asked if not just her history in the restaurant business, but her career in city politics would help attract customers to Rosie's, Christian laughed.