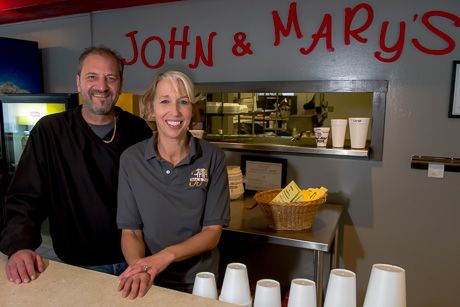 He's Ted and she's Mary and together they're the new owners of John & Mary's in Batavia. If that sounds a little confusing, it might help to know a bit of the history of the venerable Erie County group of entries. John Guida opened his first sandwich shop in Cheektowaga in 1952. Mary, his wife, insisted her name be added to the sign, so it was. (Mary Guida is 88 and reportedly still working.) Ted Ulm was born and raised in Cheektowaga and went to culinary school, became a chef, worked in a supper club and a bakery and hooked up with an instructor who owned a Greek catering business when he was 18. "Once I learned the ropes, he could run two jobs a day," Ulm said. That led to a connection with John & Mary's and eventually, Ted Ulm owned his own John & Mary's location in Cheektowaga. He opened another location in Alden in 1999, which he still owns. He opened another in Arcade that he later sold, but he does own Theo's Greek Family Restaurant in Arcade. He married Mary in 2009, and the coincidence of her name has led many people, Ted said, to assume his name is John. The name may be different, but the quality is the same, Ulm said. "Everything I make is all homemade, our dough, our sauces, our Slovakia is out of this world," Ulm said. "I win awards with it all the time." "It's a bigger menu, but it's all quality food," he added. "We use all of John & Mary's recipes. I stick by what they did in 1952. Their homemade hot sauce, top-line mayonnaise, top of the line cold cuts." This John & Mary's is actually the second in Batavia. There was a John & Mary's here in 1974 and '75. When Ted and Mary moved to Corfu, they started thinking it was time to bring John & Mary's back to Batavia. From the time Ted opened his first John & Mary's in 1990, he expanded the menu so that there would be something for everybody. There's a full Greek menu and a full Mexican menu, Ulm said. "John & Mary's is a place where a family can come and everybody will be happy," Ulm said. Article from The Batavian and taken from http://thebatavian.com/howard-owens/owners-carry-john-marys-tradition-new-batavia-location/46523