Made in WNY: Yancey's Fancy – cheese from Corfu to China

Yancey's Fancy sells its cheese as far as China these days, but the Corfu cheesemaker's backbone is its Western New York base. Two of the company's top three sellers – Buffalo Wing Cheddar and Horseradish Cheddar – have distinctly Buffalo flavor.

Those and the company's more than 30 other varieties, along with consumers' appetite for natural, protein-rich snacks, are pushing the company to new heights.

It has added a second plant that is three times the size of its original factory on Main Road in Corfu and put a robot to work coating wheels of cheese, partly because it cannot hire enough staff to keep up with demand.

Yancey's Fancy started as a maker of Limburger and Swiss when cheesemaker Leo Kutter emigrated to Wyoming County from Bavaria after World War I. He made cheese at a small factory in Cowlesville until milk rationing started in World War II. He got back to work in 1947, building a plant in Corfu, and added brick and cheddar cheeses to his repertoire.

Kutter died in 1962, leaving the factory to his sons, Richard and Tony, who grew up in the business. Soon after, Kutter Cheese Factory began its working relationship with Heluva Good Cheese Co., another household name in Buffalo, then owned by the Yancey family. Binghamton-based Crowley Foods bought Heluva Good in 1984, and the brand was sold to HP Hood in 2004.

Bailey remains a shareholder in Yancey's Fancy and some members of the Kutter family still work at the Corfu factory.

At 112,000 square feet, Yancey's Fancy's second plant is more than triple the size of the main factory, which was built just after World War II.

"You could put the whole Main Road plant in one cooler here," said Gus Pernesky, head of maintenance and engineering. "We were cramped."

Though some cheese is still hand-dipped in wax, Yancey's Fancy invested in automation over the summer, adding a robotic arm that can dip 14 wheels of cheese at a time. That takes strain off the seven workers who used to lift the heavy cheese by hand, and more than doubled productivity. Yancey's has been trying to expand its workforce, but is having trouble in the tight labor market, especially because of its far-flung Genesee County location.

"Everybody we get, we poach from somebody else, and everybody else poaches from us," Bailey said. 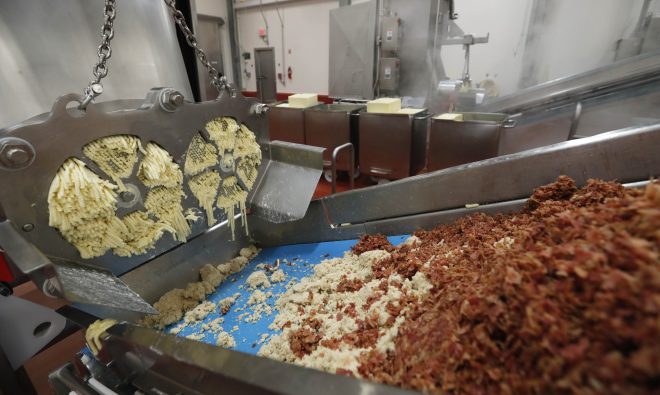 Some Yancey's Fancy cheeses are labeled "processed," but if you're thinking Kraft Singles, think again. Classified as a "pasteurized prepared cheese product" by the Food and Drug Administration, Kraft has boasted its cheese contains 5 ounces of real milk in every three-quarter-ounce slice. However, it requires 10 ounces of milk to make 1 ounce of real cheese, Pernesky said.

"We add ingredients that are usually more expensive than the milk, like bacon," he said. "Our cheese is 'processed' in the same way a baked potato is 'processed' when you mash it and add sour cream and chives."

The company only uses milk from farmers in the Upstate Farms Milk Cooperative that ban the use of Bovine Growth Hormone – another plus in the eyes of shoppers looking for natural options and cleaner labels.

But there is always room for improvement when it comes to sales.

You've likely never tasted Yancey's Fancy's highest-rated cheese, Chastinet, which came out in 2015. A natural Asiago-like variety, it was developed by Bailey and named for his mentor,  Fernand Chastinet.

Though it has won highest honors – it took the Grand Champion prize at the New York State Fair and beat out 1,800 other entries for gold at the American Cheese Society Competition – neither Tops nor Wegmans stocks it. Dash's carries it, and Yancey's Fancy's sales force is pushing for more interest.

Yancey's Fancy has a dozen flavor varieties in the pipeline at any given time. Its staff, especially with someone as experienced and skilled as Bailey at the helm, "could come up with a new flavor every day," Pernesky said. Sometimes a flavor will get a unanimous thumbs-up on taste, but turn out to be too expensive to make.

But whatever the company decides to move forward with, it has to predict what people will like two years in the future. That's how long it takes some cheeses to age.