LE ROY — Access to Oatka Creek is much easier this spring, thanks to a pair of canoe and kayak launches on Munson Street. For that, credit teamwork. 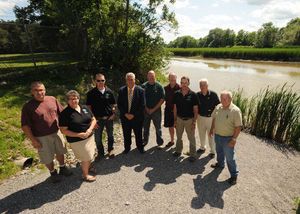 Many of the individuals who had a direct hand in the project, gathered Wednesday to celebrate — and dedicate, at least officially — the boat launches at Red Bridge. “This is another example of shared services,” Genesee County Legislator Shelley Stein. “Without every person here, this would never have happened.” The project was about two years in the making, but now provides easy access to areas upstream and downstream from the bridge. The launches are on the east side of the creek, with the upstream launch adjacent to an existing parking area and creek overlook. The launches was planned and developed by the Genesee County Soil & Water Conservation District with funding from the Finger Lakes-Lake Ontario Watershed Protection Alliance (FL-LOWPA). Supporting the project were highway departments of the towns of Le Roy, Stafford and Batavia; and the village’s Department of Public Works. Initial surveying work was done in June 2013, and most construction ended this past fall. “We had a hard time last year because of the weather,” said Stein, who is also chairman of the Soil & Water Conservation District. “So the base of it was done — everything but the seeding of grass, which we got done this spring, and then the signs. “All told, I don’t think there was more than $15,000 of actual cash,” she said “There’s a lot more in in-kind services, equipment, materials and machinery that our communities own.” George Squires, district manager of the Soil & Water District, called it “a fantastic project.” In the end, installation involved about a day-and-a-half of work, he said. “There was a lot of cooperation,” Squires said. “It’s amazing how quickly it got done.” For much of its length, Oatka Creek runs through private property, so public access is generally limited to roads and bridges. “That’s a complaint we hear all the time at watershed committee meetings,” Squires said. Aside from recreation, getting people outdoors is its own pitch for conservation, said Peter Lent, chairman of the Oatka Creek Watershed Committee. “The more people you can get on the body of water, the more they appreciate it,” Lent said. Apparently, the boat launches are already much appreciated. Lent joined Squires for a “float” on the creek two weeks ago. “All told, there were maybe more than two dozen (boaters),” Lent said. “There’s great access — it’ll keep people busy for a while.” “There were people who had never kayaked before, and who had brought their kayaks down to check it out,” Squires added. Red Bridge has always been a popular spot for water recreation, not all of it involving boats. Town and village officials recalled when Red Bridge was a choice swimming spot. Supervisor Stephen Barbeau said kids would use a rope swing to drop into the creek water. Before that, it was a swimming hole that included a diving board. There’s not so many swimmers these days. “The only time that’s done now is when someone loses a bet,” said Highway Superintendent John Arneth.