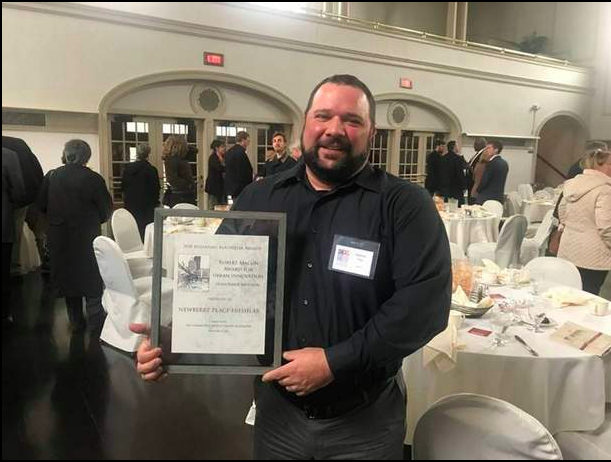 On Thursday, Matt Gray accepted the Robert Macon Award from the Community Design Center of Rochester on behalf of the Newberry Project.

The award was established to honor the late architect Robert Macon’s contributions in the Rochester area. A gifted designer and leader in the architectural community, Macon is remembered for his civic contributions and transformative projects that spanned a 30-year career in the city that he loved.

Nominations for this award recognize projects that demonstrate design excellence and contribute to enriching the public realm. Nominations were judged according to the following criteria:

• Excellence in a building or structure that has solved a design problem in a distinctive way.

• Extent to which the completed project demonstrates enduring and notable design.

• Ability to integrate that undertaking into a community’s context and extent to which it contributes to or benefits the public realm.

Meanwhile, the intended use as a foodhall with a micro-brewery anchor tenant took perseverance to advance. A simple farm brewery concept evolved into a restaurant incubator intended to keep millions of dining and entertainment dollars local to reduce spending leakage from Genesee County each year. Local leadership coalesced an infrastructure for restaurateurs to advance a concept, write a business plan and open a new restaurant in this shared space under supervision of industry experts.

However, New York State Liquor Authority does not allow multi-tenants to occupy one space. After months of inquiries and legal fees, learning of “concessionaire” was key to authorizing Batavia Brewing Company dba Eli Fish Brewing Co. the primary license to brew and sell alcohol on premise. Two additional “concessionaires” are allowed to share seating, an indoor bocce court and tasting room whereby all alcohol must be purchased at the anchor tenant. The foodhall incubator is anticipated to launch five new businesses in five years, create 30 jobs and generate thousands of tax dollars.

While bumping into walls was expected, the floor integrity, lack of power in downtown and limited capacity gas lines had to be doggedly overcome.

The heavy weight brewing equipment was placed onto the basement floor, a hole was cut through the first floor to allow the tanks to peek through serving as a foodhall feature. A tasting room was fashioned above to overlook the tank farm.

Even though the City of Batavia underwent a substantial Main Street reconstruction less than a decade earlier, adequate electric power was not available and low pressure gas lines were underground. Fortunately, the property boundary extended eight feet to the rear of the building which enabled a new transformer pole installation. Yet, that triggered a NYS building code exception request since the outdoor space would no longer allow the fire stair descent; other fire safety measures were emphasized.

Commercial kitchens and upper floor apartments were re-equipped due to lack of available gas. The gas company is now considering infrastructure upgrades due to the existing demand and recognizing more than 40,000 square feet of vacant space remains on the city block.