BATAVIA — It’s a world of action heroes, theatrical rock stars and wrestlers that’s all its own, but there are thousands that want to be part of the action, Bill Hume says.

Cited as a piece of pop culture, that world and related toys, books and collectibles is coming here this fall. The first-ever Foxprowl-Con (short for convention) is set for Nov. 20-22 at Clarion Hotel. “It stems from the store. I’ve always loved collecting stuff and I traveled to conventions and then I went as a dealer. I thought wouldn’t that be great to have my own some day,” Hume said at the Ellicott Street shop. “What an undertaking. It’s for people curious to check it out and for people who want to meet celebrities in Batavia. There’s a lot of casual interest and die-hard fans and collectors. They seek these out.” 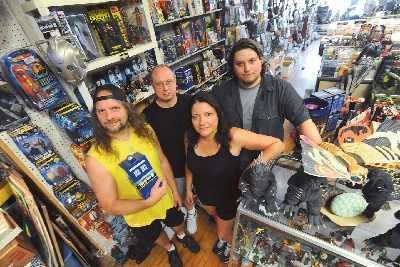 It may be in small-town Batavia, but this is no rinky-dink event. He plans on having 125 to 130 vendors and has already lined up several celebrities, with plans to sign up more. Actor Eric Roberts, an Academy Award nominee more recently seen in “The Dark Knight;” Adam Minarovich, who played Ed Peletier, a survivor of the zombie apocalypse in “The Walking Dead;” Hall of Fame wrestler Larry Zbysko; and “Face-Off” winner Rashaad Santiago, to name a few. Hume’s “ringer” celeb will be Squeaky Martini, aka Don Drakulich, of the theatrical heavy metal band Gwar. They’ll be available for photo opportunities with celebs and prop replicas such as Tardis from “Doctor Who,” autographs and speaker’s panels to talk about their craft and answer questions. It’s to be a three-day, family-friendly extravaganza of merchandise, appearances, personal interaction and films, plus seminars, card games and other activities, Hume said. “It’s a perfect escape for anyone who’s a fan of pop culture,” event committee member Tim Schiefer said. “It’s immersive. It makes the audience feel connected to the people.” There has already been some chatter — and more than 1,200 likes — about it on the event’s Facebook page, he said. Some people have discussed what they’re going to wear. But the garb isn’t jeans and a T-shirt; it will be a costume from a favorite character. Good news for those folks: there will be a costume contest all three days (called “cosplay”), plus another contest for the person with the best event-related art. Hume has culled his knowledge from other “cons” to bring in all of the popular elements, he said. Each day will feature several choices of workshops, talks and, of course, time for shopping. People can drop a few hundred easily, though that’s not a requirement. “You can buy your ticket ahead of time and walk in broke,” he said. Speaking of advance purchases, tickets are going for $25 until Oct. 1. He hasn’t determined what the next level price will be, but it’s to go up after that date. Vendors may still register to participate and sponsors are being sought to help defray the hefty cost. Part of hiring celebrities means paying for their airfare, meals and accommodations. They are coming from across the country, including California, Nashville, Tenn., Toronto, New York City, Virginia and Massachusetts. Hume intends to make this a yearly event, learning more with each one. He’s heard that if you do it right, attendance will mushroom every year after. A special VIP pass for $100 will allow “die-hard convention people” entry a half hour early and includes more goodies in the swag bag. To get more information about vendor tables, sponsorships or to buy tickets, call (585) 415-1173 or go to Foxprowlcon.com. By Joanne Beck, Batavia Daily News