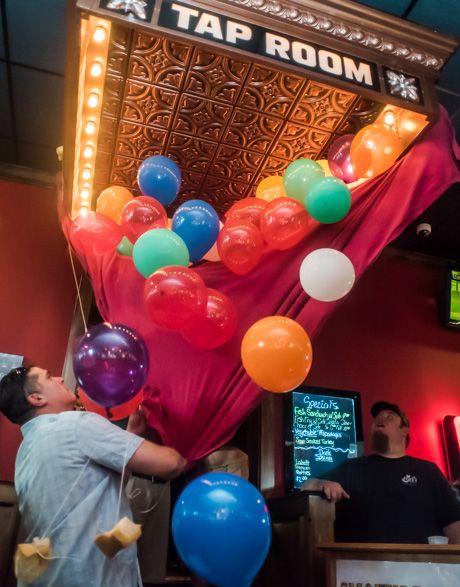 The journey for the old awning on the former Wiss Hotel to the Smokin' Eagle was a lot longer than a trip across the street and down the block. It involved a $1 auction purchase, some BOCES students, the chance discovering of a historic photo and a lost cat. Once the decision was made to tear down the Wiss, the Eagle's co-owner, Jay Beaumont, asked Bob Lathan if the village could save the awning. Beaumont had some vague idea that he might want to install it somewhere on the Eagle building at some point. Once saved, it was added to the Village's surplus property auction, and with no other buyers, Beaumont was able to purchase it for $1. Then it sat in the DPW lot for eight months because the awning was in pretty bad shape and Beaumont had no real idea what to do with it or how to restore it. Then through a chance meeting with a BOCES official at his daughter's volleyball game, he found out there was a group of students at BOCES who would love to take on just such a restoration project. Once those wheels were in motion, Beaumont began to wonder what words once appeared on the awning. There was blank spot for the sign, but no sign. He called one of the building's former owners, Don Pangrazio, and he had no idea. The next day, Pangrazio saw a post on the website Le Roy Then and Now. It was of the Wiss in the 1930s and included the awning. The sign read, "Tap Room." Mystery solved. And Beaumont acquired a copy of that photo. The photo now hangs on the wall of the Eagle, next to an enlargement of the portion of the hotel with the awning. When Beaumont got the enlargement back, he looked it over carefully just to see what he might see, and he saw a sign in the window that read "John Hepps." About this time, Beaumont's cat went missing. He loves his cat and he was pretty upset. The cat went missing on Father's Day. He had us post about the missing cat on The Batavian and he put up fliers around Le Roy. On Monday, July 4, still missing his cat, Beaumont went down the Eagle in the morning to hang the pictures. His partner Jon Marcello stopped by and Beaumont said, "hey, look at this," pointing the sign with "John Hepps" on it. Marcello did a quick Google search and found he had been a contractor in Le Roy. That evening, Beaumont gets a call from a woman, Rose Marie Betts, who thinks she found Beaumont's lost cat. Beaumont drove over to her house thinking, "this is another false lead." But it wasn't. Overjoyed, he took his cat home. She was home. She was safe and she was in good health. "My couldn’t believe that cat came out of the woods that day," Beaumont said. Beaumont drove back to Bett's house to give her a reward. She refused the money. He decided, well, maybe he could give her a gift certificate to the Eagle. He told her he was co-owner of the Smokin' Eagle, "but before I could go any further, she goes, 'My grandfather used to own the Wiss and his name is John Hepps.' I was on a high with the cat, but that took me to the next level. My mouth dropped. I couldn’t believe it." So Betts and her daughter, Christine, were guests of honor last night at the official unveiling of the restored owning inside the Eagle, which also served as the fourth anniversary of the business and a customer appreciation night. Top photo: Jon Marcello pulls the string releasing the balloon-filled cover on the Wiss awning for its official unveiling. 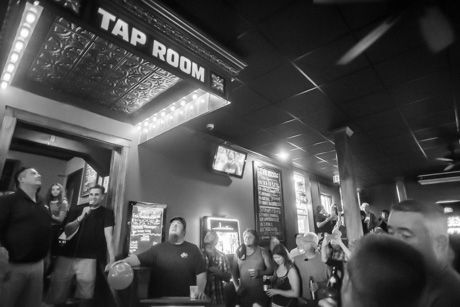 Beaumont, with the mic, speaks after the unveiling. 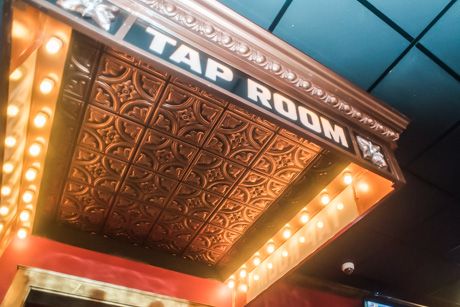 By Howard B. Owens, The Batavian