Camping along the Genesee River 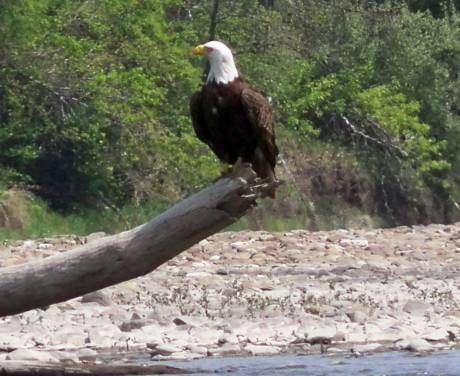 There was no mistaking the telltale markings. Even at a distance the wing span, white heads and white tail patches indicated we were looking at a pair of bald eagles in flight. While the pair of eagles soared above the Genesee River, Le Royan Jerry Fitzsimmons and his grandson, Ryan Fitzsimmons, of Caledonia, were gliding past the right bank in a tandem kayak. Riding the current, Jerry maneuvered quietly, hoping to get close enough for photos. Finally, one of the eagles alit on the remains of a weathered log, enabling Jerry to get a few pics before it once again took flight. 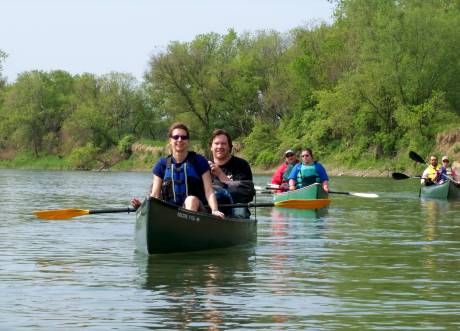 It was day three and the final leg of a canoe trip that included, in addition to Jerry and Ryan, Andrew and Kathleen Hulme, of Pavilion, Christine Hayes, a Pavilion currently residing in Brockport, Batavians Jeremy and Amy Fitzsimmons, and myself. 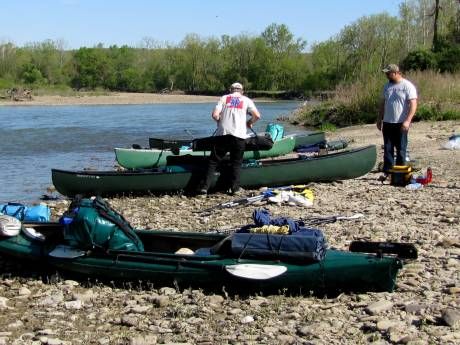 Our river run began late on a Friday in the Allegeny town of Caneadea. A short paddle on the Rushford Lake overflow took us onto the Genesee River. That first day on the river found us still paddling as the sun drew near the horizon and Jeremy opted for a suitable gravel bar to set up our tents. Our campsite wasn't really lined with gravel, but rocks of all sizes that had been washed and shaped by the river for ages. 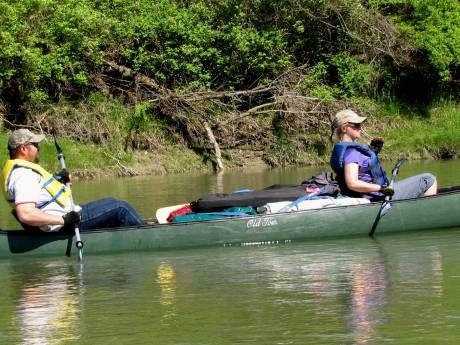 Camping on a gravel bar has its perks -- with no woodland canopy to contend with, we had an unobstructed view of the night sky. And what a view it was. There, nestled between the hills of the Southern Tier and shielded from even the faintest light from nearby towns, the river bottom was dark. The temperature dropped into the 40s that night with the air crisp and cool. When I woke during the wee hours the sight overhead was nothing short of spectacular. I never bothered with the camera -- combined with the surrounding darkness and the still of the night, a photo would never have done justice to the nocturnal panorama overhead. 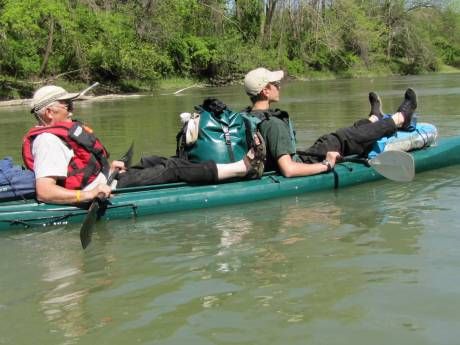 I was still half asleep when a turkey began to gobble somewhere in woods along the river. Judging from the frequency of his calls, the tom was intent on finding a hen. Once the sun climbed above the horizon grosbeaks began to sing while Jerry prepared a hearty breakfast of sausage, potatoes, eggs and hot coffee. After scalding my lips on the coffee, it was time to break camp and load the canoes for day two on the river. 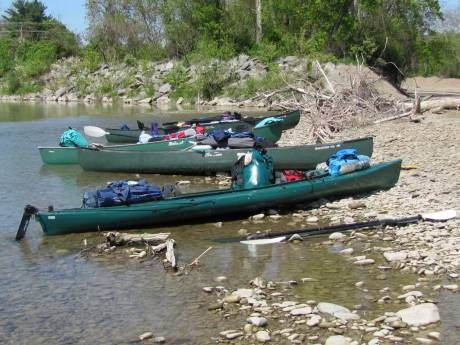 Because each craft was laden with gear, each day prior to setting out Jerry loaded the canoes, maintaing a proper balance. Because the Genesee is, as Jeremy described it, a "pool and drop" river, Jerry's expertise proved invaluable, particularly encountering the fast water found wherever the river dropped in elevation and did so at a sharp bend. 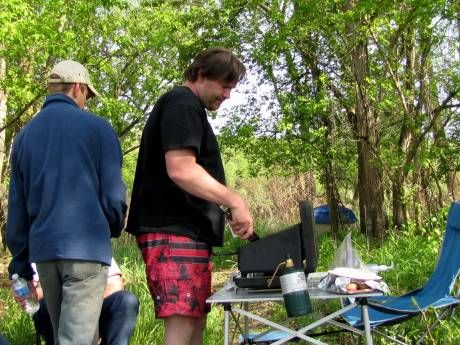 Jerry first paddled a canoe at the age of 9. His favorite haunt in those early years was an area of Oatka Creek known as Bailey's Mills near the Le Roy-Pavilion border. He and son Jeremy have been running rivers for decades, both as licensed NYS guides and recreational paddlers. Experienced and accommodating on the river, they not only served as our guides but also our outfitters and camp cooks as well. All they asked of us was to enjoy the trip...no problem! 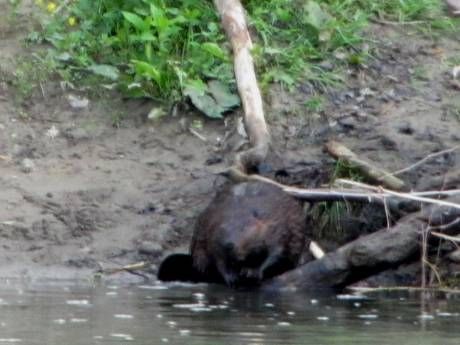 At noon of our second day we stopped for lunch on a gravel bar where the river flows past Fillmore. Another two hours of paddling took us to Rossburg where the Wiscoy Creek spills into the Genesee. That's where we made camp for our second night and it's also where we spotted one of two beavers we saw along the route. This one was busy making repairs to its home. 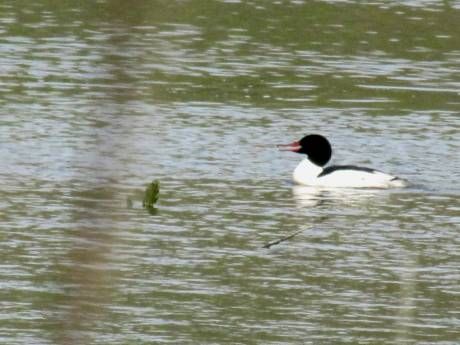 We saw several mergansers on the river and early that evening, not far from camp, Jerry spotted a fox kit and shortly thereafter located a den. When Jerry returned with his camera the young fox was nowhere to be seen, but he did find some turkey remains, including an entire wing, quills still intact. Evidently the mother fox had been teaching her kits the finer points in stalking North America's wiliest game bird. 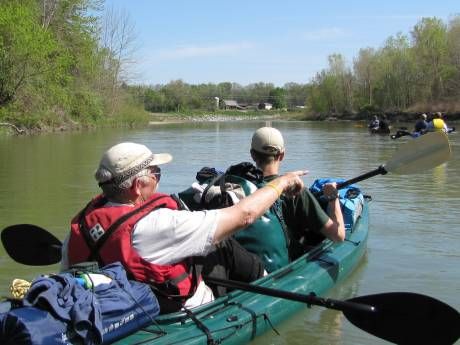 I'm not sure what Jerry's pointing at here. Could have been a heron, hawk, deer or beaver. 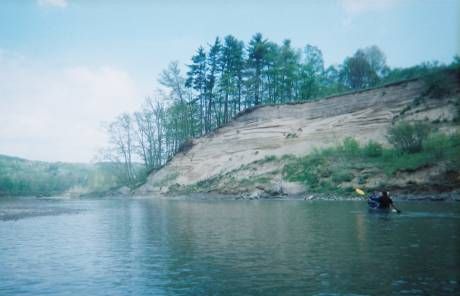 Cliff swallows were active wherever the river bank afforded them a place to live. The bluff pictured above contained a sizeable colony, literally dozens of small caves where the species make their homes. 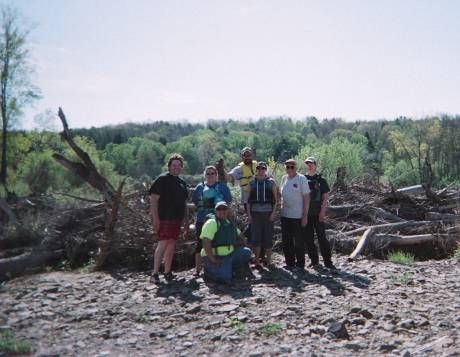 While the entire trip proved to be a relatively comfortable paddle, our last morning on the river provided a few more stretches of white water along with a few obstacles. At times we had to contend with submerged boulders that came into view at the last second or bony tree limbs sticking out of the water. When the potential trouble spots were located in a bend and the current suddenly picks up speed, it required some hard paddling and oftentimes a quick change of direction, kind of like negotiating a "river chicane." Such maneuvers were exhilarating and challenging and a great way to end the trip. Our trip came to an end at Portageville after covering an estimated 30 miles on the river.

A hearty thanks to my fellow paddlers for a fun experience and for sharing photos!